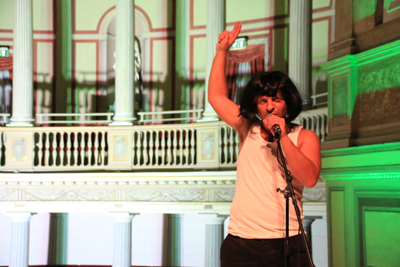 THE CURSED POETS _ n.1 Me and Baudelaire _Who wants to live forever?

It’s almost scary reading today the cursed poets, that bunch of angelic and obstinate creatures, crushed by tragic urgencies. It frightens seeing and imagining them hating the contemporaries, no longer young – and what then? – to reason, with the rigor of a goldsmith on the dark word, at the mercy of excesses, but, most of all, of an absolute fruitfulness and stylistic intransigence.
Today we would need it more than ever. But in the movement of the soul that emotion gives us when words enchant and stun us, stab and amaze, we have repeatedly thought that there was an anomalous link, perhaps rude, between piano and verse. Thus, we decided to cross it, to try to investigate it.
Between the body of the piano, impetuous and imposing, and the body of the word, darting and cutting, we put the body of the actor. It moves in and towards music, it settles in that solitude which we’re all bearers of, and it shows itself on the stage. He makes himself available to cross and to be crossed. It gets ahead into the night, it gets song to the moon, it gets gloomy and heavy sky, it gets albatross and tries to fly. Awkwardly, rudely, frantically, devotedly.

An actor, his piano and Baudelaire.

Me and Baudelaire, as a first step of a trilogy dedicated to cursed poets, is a call, an invocation to poetry, the direction of a return. It is a dialogue with oneself, it is the search for words, it is staying on words and accepting that they are important.

Baudelaire the cursed poet, the postcard poet, the poet you find in a souvenir mug after an holiday in Paris, the poet you study by heart on the bus when you’re 16, the poet of the whores, of the night alleys, the poet of the obsessions, of the 865 letters to his mother, the poet of contradictions, unwanted, not recognized when he would have really needed it, not beloved, penniless and above all alone, alone, alone. The solitude that he throws on us is boundless. But what is a poet?
Not many years ago someone sang in front of thousands of people: Who wants to live forever? Perhaps Baudelaire would have wanted to answer if he had heard.

But do we really want to live forever? 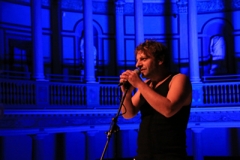 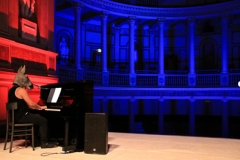 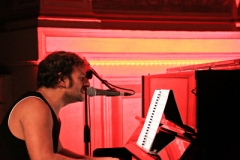 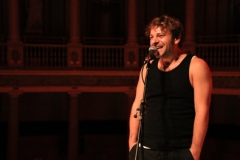 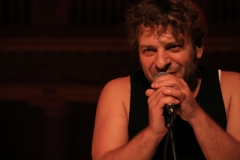 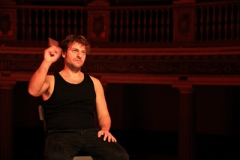 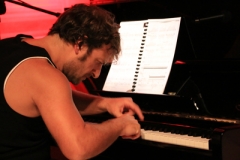 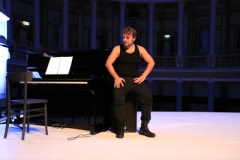 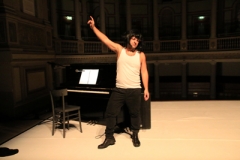 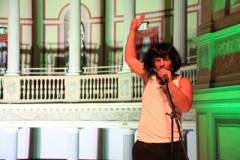 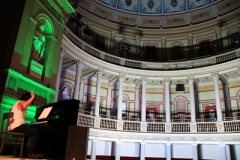 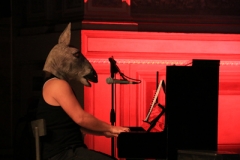 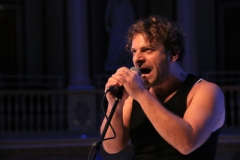 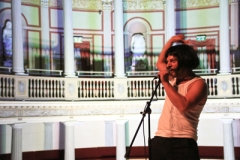 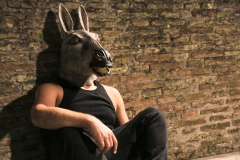 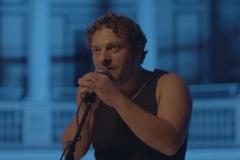 For years, relations with Biancofango company have been unsettling, criminal, epidermal and, I would say, obstinate, made of a distant lyricism and a moon appearing into anomalous nights, and here comes the moment of a melee with the heart, with the blackish verses, with the authors off limits. (…) Awkwardly, rudely, frantically, devotedly. Here are the adverbs of Biancofango, which are a manifesto of a pirate vitality. And this first chapter on cursing let us feel the harmony of obsessions, of the dark sides.
Rodolfo di Giammarco, la repubblica

There is a strong bond between Io non ho mani che mi accarezzino il viso in 2017 and POETI MALEDETTI _ n.1 Io e Baudelaire _ Who wants to live forever?,, new valuable production of the Biancofango company presented in the last evenings at the Teatro di Villa Torlonia in Rome and soon, we hope, scheduled in other theatres of the Peninsula. A knotted tie with double knot. Because the couple formed by Francesca Macrì (playwright and director) and Andrea Trapani (interpreter and co-author of the playwright) continues that investigation on the connection between identification and estrangement, fiction and autobiography, character and interpreter, which has been happily faced in the previous work and what that previous work – whose title recalls a splendid verse by David Maria Turoldo – left only a glimpse (looking for a meaning in existence by believing frantically in one’s own poetry of individuals and artists) now becomes incandescent matter, based on an equally incandescent question: how can poetry really become theatre? In other words, how can Baudelaire’s verses be translated into a scenic body? In sweat, vision, actor writing, music, word recited and not simply said? The gaze of the company therefore rests within the “dark, sharp and lightning ” words of the great French poet and, translating, selecting, composing the vast material available according to symbolic and analogical trajectories, it seems to push them into a border area where it enters legs stretched the need to overlap Baudelaire’s voice on that of the interpreter. He has been called for a dangerous but vital game: to be an actor, a pianist, an artist in the labyrinth of his score and at the same time just Andrea, a man who exposes himself to his own personal biography, finding something of himself – or perhaps a lot – in the excess, in the anger, in the restlessness of the lines. And finding, even more, in being and not being a character the opportunity for a crossing of one’s memory that transforms that of being there, on the stage, into a precipice of humanity. The great topics of fear, fragility, failure, death become a common carpet where to lay poetry, piano (played live by Trapani with an extreme virtuosity), lights and personal references to Nanni Moretti and Freddy Mercury. Youth icons used here as characters mentioned several times and as essential elements of dramaturgy. (…) If, actually, the Brechtian imprint inherited from the 2017 show becomes more refined and “philosophical”, the most vivid impression that remains after “Io and Baudelaire” (which will be followed by two other performances always dedicated to cursed poets ) is a real poetic synaesthesia translated, dragged, transfigured into intelligent theatrical language. It only takes a few handholds. A piano facing the hall. A microphone. A donkey mask (clear tribute to Marco Martinelli and the “donkey” prologue of the Albe). The Baudelaire’s very modern poetry and classical music are enough. The pop and the rock one. Some warm play of light. The actor’s body. An actor who often plays and plays from behind. And who tells a lot about itself. He tells, for example, of the Pollini concert at the Pergola which began with hours of delay and at the end of which he understood that the great maestro “was FEARED”. It tells of those films by Nanni Moretti in which the EGO asks for an audience, voice and credibility. Of those school years. Of that great passion for music, for cinema, for poetry: “But if a child secretly reads poems, when he grows up, what can he become?” And above all: who is a POET? (…) Maybe he’s like one of us. He writes desperate letters to his mother. He anguish. He fidgets in the cages of life. He shakes. Andrea-Baudelaire-Moretti-Mercury give an answer for this question as he can do. Through a continuous transfer of memories, quotes, images, the good actor gives us a very mature and, we would say, almost lyrical proof: the features appear relaxed, open to the smile, the voice is often cautious, light. Then it becomes high-sounding and furious. But never shady, cynical. While he’s acting and / or talking to himself, he plays. The repertoire ranges from Beethoven to Mozart, from Schubert to Benedetto Marcello and Bach, passing through De Gregori, Jannacci, Conte, Bohemian Rapsody by Queen, the song which closes the piece. Thanks to a wig and a final identity slip, Andrea’s poetry now asks almost screaming: «Who wants to live forever?». And only apparently its juxtaposition of echoes, quotes, dreamlike and mysterious passages can seem illogical. Because – that’s true – the answers we try to give us every day to survive can sound illogical. But not the questions: “God of Fortune, of Joy and of Light / even David on his deathbed / would have asked you for a miracle, / but I, God, I ask you nothing but prayers”.
Laura Novelli | PAC megazine arte e cultura

An “upside down” Torlonia Theatre hosts on stage the audience of No.1 Io e Baudelaire, from Biancofango, the well-lit boxes in the background. The scene suggests a reading setting with accompaniment – stand and microphone on the right, upright piano on the left – but Andrea Trapani immediately introduces us in something which has more the flavor of an unorthodox cabaret, with grotesque and macabre tones. A microphone, a piano; the sweaty, restless hands of a Maestro, Maurizio Pollini, who sings, obsessively, the first bars of the sonata op. 49 n.1 by Ludwig Van Beethoven. Because even the great maestro Pollini, in front of the audience of the Teatro la Pergola, is afraid. Eight painful bars open the sonata in G minor and Trapani, now on the piano, repeats again and again, wearing a donkey’s mask, before embarking on a severe and pressing rhapsody of voice and verses. Nanni Moretti and Pasolini, De Gregori and Queen intersect with the harsh words of Baudelaire, the dreaded cursed poet, the singer of the spleen and opium. “I didn’t say it: Baudelaire said it.” A refrain that reminds us how the poet, in his vertigo of his 45 years, perhaps had already said everything. All that lies beyond the skimpy lines of the books, the chocolate quotes, beyond the curse and hallucination. And you? What do you think? What does Andrea say? Andrea Trapani – and Francesca Macrì, co-author of the dramaturgy – tells us about a teenager commonly out of the norm, who as a gift for his promotion at school – or for a not rejection – chooses the ticket for the Maurizio Pollini concert (first row, seat number 4) and who reads Baudelaire. He reads Baudelaire out of school anthologies, out of permitted places. It tells about lost generations, sometimes immature. “Because I don’t want to overcome the Oedipus complex!”, Nanni Moretti shouts in an amplifier to those who don’t want to grow up and find in the used rooms – domestic and poetic – a reassuring and turbulent chaos. And Nanni Moretti, from Sogni d’oro, tells us about the paradox of a sleepy and apathetic teaching, of a dead school. (…) The acting of Trapani is far from the monotone school litany: harsh, broken, now shouted at the centre of the scene, now snarled against the microphone. Baudelaire as you’ve never heard it. The feverish and introverted Beethovenian pages accompany the poet’s anger. It’s not a reading, rather a concert, a concert for Baudelaire: from the best known verses to the heart-breaking letters to his Mother (actually, this is a never overcome complex, an obsessive and ardent affection), to which this time the notes of Bohemian Rapsody are intertwined. 45 years. August 31, 1867. November 24, 1991. Also Freddie Mercury dies at 45. “And I can’t stand you can die at 45.” Thus the icon, the idol, invades the stage and illuminates with red the frescoed galleries. He sang in front of the largest audience in history, “who wants to live forever?”. Who knows if he had read Baudelaire. Who knows what Baudelaire would have replied. Can you live like this? Can we live like this forever? “Ce que j’ai toujours trouvé de plus beau dans un théâtre, dans mon enfance, et encore maintenant, c’est le luster, – a nice objet lumineux, cristallin, compliqué, circulaire et symétrique”. While the lights in the stages in front of us still change, and the actor still runs, now on the microphone, now on the piano, now speaks and plays, the words resound with vivid bitterness, now naked in poetry, in the head of those who is listening. Looking for something more, something beyond an usual and digested paradigm: the poet is like the albatross, and he stumbles on his giant wings. Pasolini did not say it, Nanni Moretti did not say it, Freddie Mercury did not say it … I do not say it: Baudelaire said it
Angela Forti | Teatro e Critica 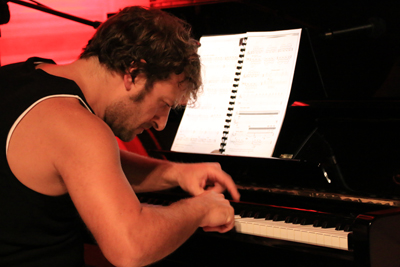